When Was The Last Time You Thought About Kenny?

If you haven’t figured out by now that I am an “Old School” NASCAR fan, then you have not been paying attention. I love aggressive drivers. I love when drivers can scare the crap out of your driver just by being NEAR them. We don’t have many left in NASCAR and that is NASCAR's fault. During their “WE MUST BE P.C. FOR THE CHLDREN CAMPAIGN” they lost my respect. Give me a freaking break. It was for the sponsors and how their driver might be a bad or good influence on their product. I have never allowed a NASCAR driver decide what I shop for and from whom. I realize many fans are so loyal to their driver that they will only drive a certain name brand vehicle or choose Lowes over Home Depot etc...I’m just not one of them. 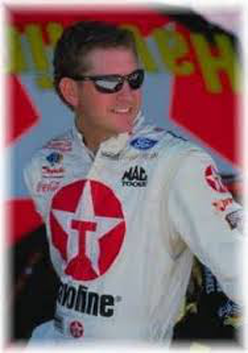 I drive a Jeep, so what does that tell you? Back to aggressive drivers. I cannot think of any active NASCAR drivers that I believe give me reason to worry that they may take out my favorites in order to win. Most times it's a racing deal and not intentional. There have been glimmers of hope, however not enough to my liking. I think it is fair to say that Dale Earnhardt Sr. was the last of the great aggressive drivers. They did not call him “The Intimidator” for nothing. He was not the only one. Many NASCAR fans forget about a driver that was very aggressive and unfortunately did not get the same respect as Dale Earnhardt, Sr. did.  But, he had mine, and his name was Kenny Irwin.

You knew that if he could, he would move anyone out of his way and not give a care in the world. Please realize, aggressive driving does NOT mean intentionally harming another. Drivers are well aware of how to tap a vehicle “just right” in order to cause a spin or as Sr. would say “Rattle their cage”. Both Kenny and Dale were masters of the art. Have you ever heard of Kenny Irwin? Do you remember who he drove for? Do you remember when he would be behind your favorite driver and you were cringing and begging Irwin not to touch the car, DAMMIT?! I do and as I type this I chuckle a little. He was a scrapper and oh my Lord we need that back in NASCAR. Kenny, I wish you were still with us. If you are a new fan of NASCAR then you might not know that Kenny Irwin died in a tragic accident July 7th 2000 during practice at Loudon International Speedway.  A stuck throttle was to blame for the accident and it was also to blame for young Adam Petty's death at the same track two months apart.

Kenny Dale Irwin, Jr. was born in Indianapolis, Indiana August 5th, 1969. Kenny started racing at the ripe old age of 5 years old in the quarter midget series. He drove for his Father all throughout his teen years for the International Motor Sports Association. He eventually worked his way up through the NASCAR ranks all while winning “Rookie of Year” during his career, including in 1997 for The Craftsman Truck Series and 1998 for Winston Cup. He was relentless and fun to watch. He raced for MB Motorsports, David Blair Motorsports, drove Robert Yates Racing's legendary No. 28 Havoline Ford, and ended his career with Felix Sabates in the No. 42 BellSouth Chevrolet. Irwin's number one rival was none other then-fellow Indiana native, Tony Stewart. They had raced together most of their career and put on a great show for the fans with their “aggressive behavior” to one another's race cars.

Check Out These Gems

Obviously they had quite a history together. However, after Irwin's death Stewart took it the worst. He dedicated his win that weekend in Loudon to his lost friend and he also is the most generous to The Kenny Irwin. Jr. Memorial Foundation.

What many did not know about Kenny until after his death is that off the track he was busy. Not only with his responsibilities as a driver but as a human being as well. Kenny's parents found out that Kenny had actually been a huge impact to a lot of sick children's lives. He paid for these children's much needed operations when their parents could not. Why did we not know? He gave the right way. No fanfare, no glory for him – with love and peace in his heart. Kenny was also well known in the garage as being generous with his time to his fans, especially kids. 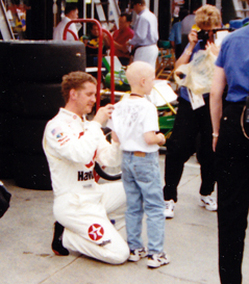 Now I can bore you to death with his stats, however that is not why I wrote this article. You want his stats, google it. I wrote this due to the fact that I miss seeing Kenny on the track and I miss seeing drivers LIKE Kenny on the track. Who knows, with NASCAR rules he probably would have been tamed and not as exciting to watch. I am a NASCAR fan and I wanted to remind you of a great driver that tore it up every week and never gave up. If you have never heard of him, I'm blessed to have introduced you to Kenny. He had a ferocious reputation on the track while off, he was the kindest soul you could meet. We never knew until it was too late.

Please visit the foundation Kenny's parents have put together in his honor.