And Then There Were Four

I bid you welcome gentle readers, and a warm and cordial welcome as well to our assigned NASCAR reader of the day, wherever he or she may be found on this cool, crisp autumn day. We did get through the race in the desert… after some time. Make that a lot of time! It ran so late that this ancient scribe had to read about the anti-climactic ending the next morning.

All day on Sunday and well into Monday morning, we learned a whole new meaning for “The Valley of the Sun”, as torrential rains soaked the track and all of the surrounding area in what seemed to be never-ending waves of water. The last wave that I can vouch for came as the clock neared midnight, and it was time to give in to the Sandman. Chatter on both this site and Twitter had continued at full race pace all through the hours of rain delay, so I not only missed the end of the race, but the finals in NHRA at Pomona and the Sunday night NFL game as well.

Upon awakening on Monday morning… does anyone here wake up willingly on Monday morning...? I found that the race had been won in the pits by Dale Earnhardt Jr., guaranteeing a lot of happy folks in Junior Nation. However, our Crown Prince of NASCAR is not among the final four, so he, like everyone else, will be totally ignored at Homestead this coming Sunday.

We’ll get around to those final four in a few minutes, but first let’s share some good news that came in just too late to make it into last week’s column, where it really belonged. I thought I had the actual number of additional feet of SAFER barriers added at Phoenix Raceway, but now that I’d like to use it, I can’t find where I put it. Ah well, it matters not, as I have an updated map, showing how much of the one-mile track is now protected by SAFER.

Bravo to Phoenix, another ISC track that has chosen to lead rather than follow, when it comes to the safety of our drivers. Nothing does a better job of protecting them than SAFER barriers. Inside corners do count, but we, the fans that care, understand that it can’t all be done in a day. Keep up the good work. The goal is getting nearer with each addition.

Along those same lines, I thought I had been told that Homestead also had done some addition to its SAFER barriers, but a thorough search of Jayski.com, Google and their own website discloses not one word. To the best of my knowledge, this is what Homestead looks like today regarding SAFER barriers. 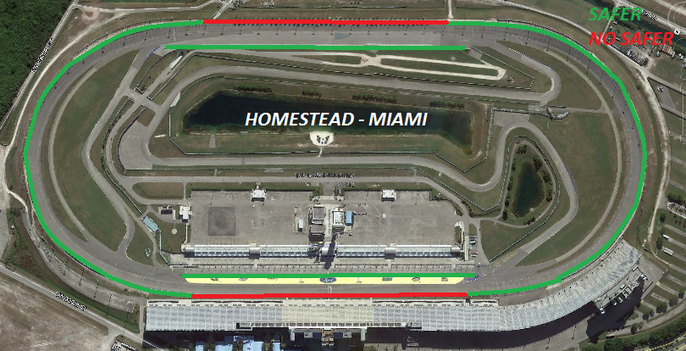 Apparently, they have SAFER on the outside of the curves and the inside of the straightaways. I confess to not knowing who runs the show at Homestead, but to whomever… this is not enough. There is a full half of the track not protected, and when the Orlando Sentinel did their track survey in July, this track never even offered a response. Lesa France-Kennedy, this is an ISC track. Perhaps you could talk with whomever is in charge and get things moving in the right direction?

We do have another picture from Google Earth, showing that there are not even inside walls at Homestead over much of the track. If a car goes sliding through the extremely generous amount of grass at each end of the track, how far can it go before striking something in the infield that will stem its slide? The Imagery Date on this Street View of the track is August 2015. (It’s located in that dark strip at the lower right, it anyone cares to check it.)

Not all of the tracks are available with Street View, but as you can see, it tells one very clearly where there is and is not SAFER. I’m really not sure what to make of the fact that there can’t be SAFER on the inside walls throughout all four corners, because there are no inside walls. Judge that for yourselves, gentle readers. I can see an extremely high jeopardy factor when there are people in that infield. Someone better remind the folks at Homestead that “The Safety of our fans and drivers always comes first. It has to.” ~Brian Z. France

Now it’s time to take a peek at the upcoming race at that track without inside walls. Sunday will be the final race of the “Chase”, for those of you that believe in such things. It will close down the stock car racing season with only four days until Thanksgiving and the start of the Holiday season. This old lady is more than ready to see racing take a bit of a rest, but she is in no way ready or prepared for the fact that as I type, Christmas is only 36 days away. You’ll find a pretty little graphic on our Home Page to remind you of the dwindling time left to shop, cook and fret, probably with emphasis on the latter.

I’d like to ask a question if I might. Last Sunday, Dale Earnhardt Jr. won the long-delayed race at Phoenix. That same driver is quite likely to be voted Most Popular Driver once again this year, after having won it some skatey-eight times already. Have any of you tried to explain to a “non-fan” how it is that he is not eligible for the big prize to be handed out at the end of the Homestead race? How did that work out for you? Next time, try explaining how Junior is “eliminated” from Chase competition, yet will be right there among the fray on Sunday, trying to win the race, though he cannot win the Chase. That is guaranteed to get you a look of incredulity, the likes of which you have not seen until that moment.

Ah well, it is Brian’s game, so he does get to make the rules; but folks such as I still get to question them and perhaps poke a bit of fun at them, as ridiculous as they are. In the world according to Brian, a scary place, to be sure, there are now only four drivers left in competition, even though 43 of them will be on the track come Sunday… if it doesn’t rain. These four were not chosen for any particular accomplishment throughout the year, such as having earned the most points or won the most races. Instead, they are what was left after a very suspect process of non-elimination, if you will.

In all honesty, I cannot say that any of the “Final Four” (Brian likes that term. It comes from Basketball) is undeserving in his own right. I merely question the process by which they were chosen. Here at Race Fans Forever, I like to refer to my gentle readers as “Patty’s Kids” because I like the initials. Well, Patty’s Kids crowned our own Champion back at Richmond, just before someone started messing with the points. Our Champion has been and will remain, Kevin Harvick, who had raced well and earned his spot at the top with no shenanigans or sleight of hand. It is only right and just that Kevin is in Brian’s Final Four as well.

Sunday will tell the tale for those that believe in Fairy Tales and invisible eliminations. Let’s not kid around here. There is one whopper of a check that goes along with that silvery thing that isn’t a cup, and all four of those left in the fight want to win it. To illustrate that, your scribe created a little graphic that will soon be decorating our Home Page as the Homestead race draws closer.

That little graphic tells us that it’s time for our Classic Country Closeout, and first up today is an old one by Johnny Bond called “Ten Little Bottles.” This one better get some laughs or I’m comin’ out there and rearrange your way of thinkin’!

Next up let’s enjoy a little history lesson as sung by Stonewall Jackson. This is “Waterloo.”

This golden oldie came out I believe when I was about 10 years old. For those that are counting, that would have been 1948. This is Jimmy Wakely with his original rendition of “One Has My Name.”

This one comes from one of my all-time favorites, Tex Ritter. It’s a pleasant little ditty with some great guitar slides that I just love. This is, “When You Leave, Don’t Slam the Door.”

This final song (Sorry Jim, but I just had to play this one) is one of the last recorded by Tex, in 1967. It’s a touching love song, much softer than much of Tex’ work. Here then, written by Jeremy Slate, is Tex’ version of “Just Beyond the Moon.” Listen and you’ll see why I love it so much.

Be well gentle readers, and remember to keep smiling. It looks so good on you!